SEO VS SEM, Which One Has the Best ROI?

No matter what you do, ROI (Return on Investment) is one of the top priorities when running a campaign.

All the metrics that are presented as results of a campaign are interesting, but at the end of the day what matters is how much was earned.

ROI allows you to evaluate a campaign by its effectiveness, not by its costs or requirements.

Why should I do SEO?

Undoubtedly, SEO provides the best ROI within digital advertising campaigns. The long-term benefits, even after the campaign is over, make it the most effective medium.

This time we decided to show a specific case. SEO is often talked about without giving numbers and we thought it was important for you to see the results of a campaign.

The data presented below belong to an important clothing company in Argentina. During the same period, SEO and SEM campaigns were carried out in parallel.

The SEO campaign had to be stopped after 3 months because the company reached its production limit. They are currently expanding their factory.

In the SEM campaign, you can see that once it ended, so did the revenue.

The SEO campaign, on the other hand, continues to bring in revenue over time!

It is very important to pay attention to the scale of the graphs. When comparing the revenues, the revenues generated by the SEO campaign comprise more than half.

What was the investment in each campaign?

What about SEO ROI?

The monthly investment of the campaign was $26,000 (a total of $78,000 in the 3 months of the campaign), and the amount earned so far was $1,178,994.11 (the cost of each campaign varies depending on the degree of competitiveness of the positioning of the selected keywords).

This means that for every peso invested, 15.1 pesos were earned. 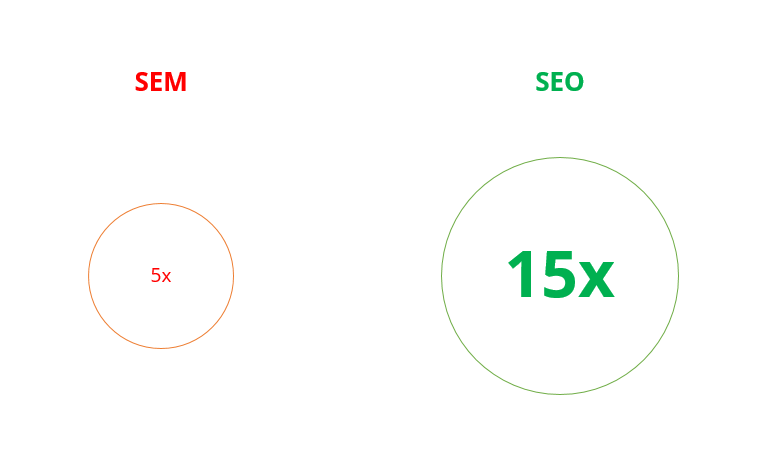 3 times more than Adwords, and the revenue keeps coming in!

As always, you can use the comments for questions on the subject, and if you are interested in running an SEO campaign feel free to contact us!

Exclusive SEO agency. We are the first SEO agency certified as Great Place to Work. In 2018 & 2020 we were chosen as the Best Online Marketing Agency for eCommerce by eCommerceDay and The Best SEO agency in LATAM by Clutch.

SEO: 4 recommendations to train yourself in organic rankings

Techniques that harm your site’s ranking

How to see the historical ranking of your keywords… for FREE!

Exclusive SEO agency. We are the first SEO agency certified as Great Place to Work. In 2018 & 2020 we were chosen as the Best Online Marketing Agency for eCommerce by eCommerceDay and The Best SEO agency in LATAM by Clutch.